This year’s Tatsushige-no-kai, Udaka Tatsushige’s self-produced performance event, features the famous play Semimaru. The masks which will be seen in this performance are the Semimaru from the Kongō collection and a Masukami carved by Udaka Keiko. As the day of the performance approaches (28 August 2022) we asked INI founding member Rebecca Teele Ogamo to share some of her thoughts about this highly poetic and touching play.

Semimaru introduces a prince and princess, Semimaru and his sister Sakagami, who, because of karmic misdeeds in past lives, are forced into circumstances opposite what might be expected of their royal birth. The prince is blind, and the princess is not right in her mind. While there are many legends associated with Semimaru and shrines dedicated to him, such as Seki Semimaru Shrine in Shiga prefecture, Sakagami is an original character created by the author, Zeami.

At the start of the drama Semimaru because of his affliction, is being taken to be abandoned at a lonely mountain barrier at the order of his father the emperor. Though his eyes are unable to see, he has the insight to understand this seemingly cruel fate as a demonstration of his father’s compassion and concern as he is being allowed the opportunity to make positive advances towards his fate in future lives. A humble sympathizer provides him with a simple hut. His head shaved to indicate he has renounced the world, he is left with his biwa, a kind of lute, of which he is a master. Perhaps we might call him a kind of “old soul.”

Sakagami, on the other hand, seems to see all too well, the intensity of the passion with which she perceives discrepancies in the order of the world lead her hair to stand on end and her words are taken as wild ravings to be mocked by those she encounters. What is the proper order of things? Seeds planted in the ground manifest as flowers above us; the moon shines in the sky above, while, moonlight, its reflection, penetrates the depths of the sea. An over-active inquiry into such things can lead down the slippery slope of heresy and of madness.

Sakagami’s wanderings after Semimaru has left the capital take her at last to a place where she hears the unexpected sound of a lute which she recognizes and brother and sister meet in the mountain depths. Reunited, they share their mutual pain and sorrow, until drawn by her destiny to wander, Sakagami leaves, even as Semimaru is destined to stay where he is. They part weeping, with Semimaru calling that he hopes his sister will visit again. She turns, her tears, which he cannot see, her answer.

The Semimaru mask used by the Kongō school shows the aristocratic features of a young man who seems in deep meditation, eyes half closed, but other senses alive to other information:  the sound of concern in a retainer’s voice, the feeling of a breeze on the skin, the scents of the forest. The mask seems to accept and absorb what is around it without any negative or judgmental response. Even when the mask is moved, its expression seems to change very little.

The Masukami mask associated with the Kongō school for the role of Sakagami is seen in roles of goddesses or of women moved by heightened emotions, such as a shrine maiden in a state of possession. As the performer moves, an expression of grief changes to frustration or a cool despair appropriate to a goddess knowing displeasure with the human world, or with fellow divine beings. It is a powerful mask that challenges the viewer to rip aside the veil blurring the distinctions between worlds. A mask called Zo-Onna with similar qualities is often used for the role.

Semimaru is sometimes described as being a terribly tragic play as brother and sister are caught, willy-nilly, by a karmic fate that seems unbearably cruel. My own impression, through the power of the masks I’ve seen in performance, is of two survivors who deal with their fate differently, one with acceptance, the other with resistance, who meet and share nurturing tears, before parting to fulfill their destinies. Through the creation of the role of Sakagami Zeami introduces a meditation on an understanding and approach to the conundrums of life which are as immediate today as when the play was written. 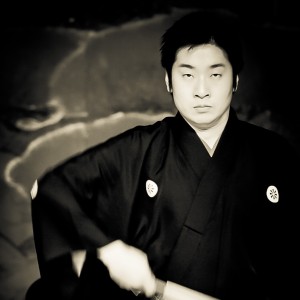 On 14 March 2015 Udaka Tatsushige (first son of the INI founder Udaka Michishige) will hold the first Tatsushige no Kai, an annual Noh performance event he is producing, featuring high-caliber actors and musicians. Each year Tatsushige is going to take the main role in a particularly challenging play from the Kongo school repertoire. On the occasion of this first Tatsushige no Kai, Kongo Hisanori, grand-master of the Kongo School, has chosen for him the virtuoso Noh play Mochizuki. Family tickets and ‘next generation’ tickets for students and Noh theatre beginners are available!  Check out the full program in English here!

Mochizuki tells a story of revenge, celebrated in classical Japanese literature as an example of loyalty and selflessness in the face of injustice. Lord Tomoharu was assassinated by his cousin Mochizuki, who took over his land and property. In fear for their lives, Tomoharu’s retainers scattered and his wife and son fled their home. When the play begins thirteen years have passed, and now one of the retainers, Tomofusa, is the innkeeper of the Helmet Lodge in the post town of Moriyama. One day two guests, a mother and son, appear without any servants. Tomofusa recognises them as the wife of his master and their son, Hanawaka. At the same time, Mochizuki, the killer, is on his way back from the capital, stops at the Helmet Lodge. Tomofusa recognises him and, together with the wife and son, plots to avenge their master. Mother and son pretend to be entertainers and, together with Tomofusa, they dance for Mochizuki as they pour him copious amounts of wine. Mochizuki is lulled by the wine and the wonderful dances so that he doesn’t realize what is happening when Hanawaka and Tomofusa approach him. They declare their identities and strike him down, finally avenging Tomoharu’s murder and restoring his properties to his family. (Story Outline by Rebecca Teele Ogamo).

What is so special about Mochizuki?

In the trailer below you can have a taste of how the dramatic entrance of the shite on the notes of the lion dance.

Make sure to check out the Tatsushige no Kai website (in English) for more information on the performance and for ticket reservation. The Tatsushige no Kai has made special arrangements such as family seats, ‘next-generation seats’, and a child nursing service. An English translation and synopsis of the play will be available. There will be a reception with light refreshments served in the lobby after the performance. If your time permits, please join us for a chat.

This year the Matsuyama Shimin Noh celebrates its 30th anniversary! On November 3rd 2014 Udaka Tatsushige, Michishige’s elder son, will perform the Noh Midare, a special variation (kogaki) of the Noh Shōjō. Udaka Norishige, his younger brother, will perform the maibayashi (chant and dance excerpt with instrumental dance) from the Noh Takasago.

From 10:00 to 14:30 students of Udaka Michishige will perform dance and chant excerpts. INI members will also participate with the following shimai: Rebecca Teele Ogamo (小鴨梨辺華): Ochiba, Diego Pellecchia (高谷大悟): Kantan, Elaine Czech: Ukon. The performance of Takasago and Midare will begin at 15:00. A young man named Kofu living at the foot of Mt. Kanekin in China is a virtuous and dutiful son and as a reward for these traits he is granted a dream oracle in which he is advised to open a wine shop near the Yangtze River. He does so and becomes very prosperous. One day a stranger comes to the shop. No matter how much he drinks his complexion never changes and he never seems to become drunk. When Kofu asks his name he says he is Shojo and that he lives in the sea. Shojo invites Kofu to meet him at the Bay of Jinyo on the western part of the Yangtze River.

The Noh begins with Kofu’s narration of these events. He explains that he is on his way to meet Shojo at that moment. He admires the moon as he waits at the appointed place and anticipates the pleasure of drinking wine with his friend. Shojo enters and the chorus describes wine as a medicine or elixir with the power to keep those who drink it from aging. Shojo offers to dance in celebration of their friendship. With the sound of the booming of the waves as a drum and the wind through the waves as a flute to accompany him, he dances: now on the beach, now in the surf along the Bay. His dance ends, but before he leaves he praises Kofu for his obedient heart and as a gift he presents him with a jar of wine which will never run dry. He dips the wine and drinks, then with faltering steps sinks down to rest. When Kofu himself awakens from his drunken slumber he finds that the Shojo has disappeared, but the jar of wine remains, a spring of wine that will be inexhaustible for generations to come.

Midare features the midare-ashi, a particularly unusual and challenging dance sequence, is performed instead of the usual chu-no-mai medium tempo dance.

Though the original play Shōjō was a typical two part Noh, over the years it was abbreviated to its present one-scene form. The play Taihei–Shōjō in the Kanze school repertory is considered to be another early rendition of the story and is a Noh in two parts. 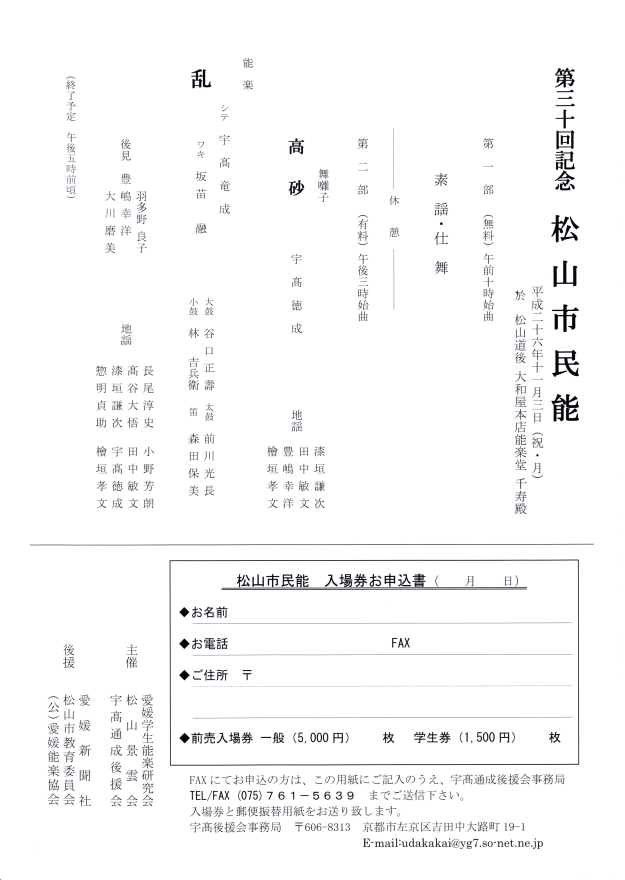 This is the first of a series of posts on photographers who have worked with the INI and with Udaka Michishige.

Irwin Wong is a professional photographer based in Tokyo. A few months ago he contacted the INI as he was looking to arrange a photo shoot commissioned by camera maker Hasselblad for the advertising campaign of their new model. We arranged to meet at Iori, a machiya, or traditional house in downtown Kyoto: Michishige brought his costumes and the masks he carves, and his sons Tatsushige and Norishige helped him with the complex dressing process. Irwin brought his camera and lighting equipment, while his collaborator Kondō Keiichi filmed the behind-the-scenes that you can watch in the video below. It was very productive day and Irwin’s pictures are just stunning: make sure to check out his post on the photo session, which also includes technical information about the cameras and the lights.

We can see two characters in the pictures: the female character is the mae-shite for the Noh Uneme, which Michishige performed in February 2014. The costume is a karaori, or Chinese brocade, and the mask is Ko-omote, to portray the face of a young girl. In stark contrast with the delicate female character is the vengeful ghost of Taira no Tomomori, appearing in the second half of the Noh Funa Benkei. Features of this costume are the white hitoe-kariginu, symbolising the character is a ghost, and the halberd and sword. The mask is Shintai, also used for roles of powerful gods. 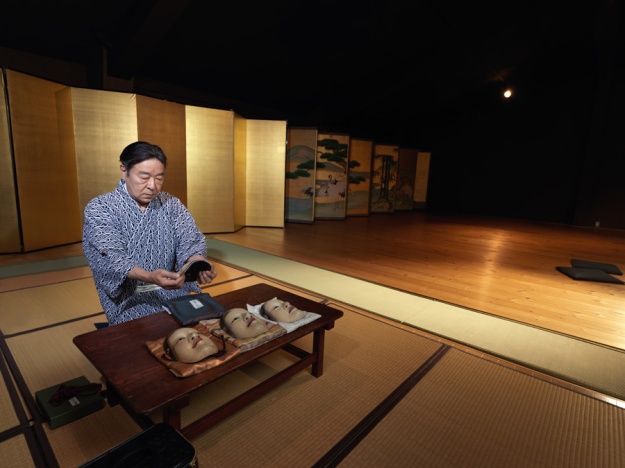 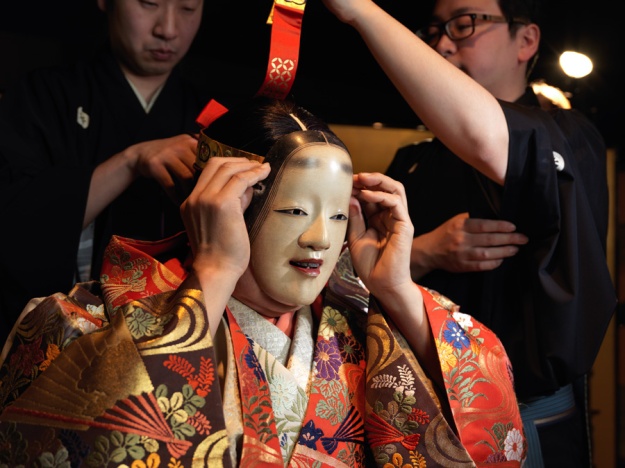 Udaka Tatsushige and Norishige dress their father Michishige as the Ghost of Uneme. Photograph: Irwin Wong. 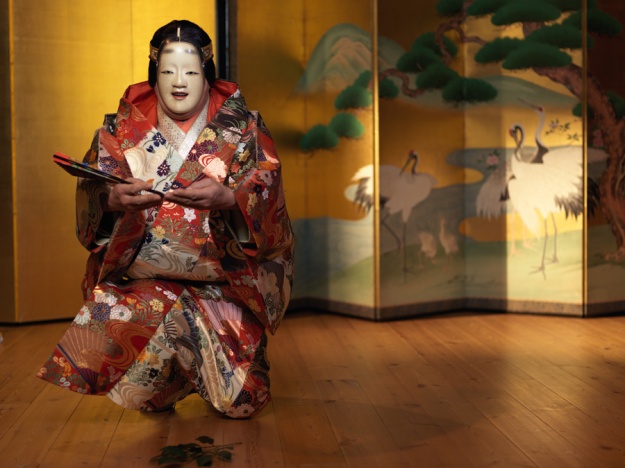 Udaka Michishige as the Ghost of Uneme. Photograph: Irwin Wong. 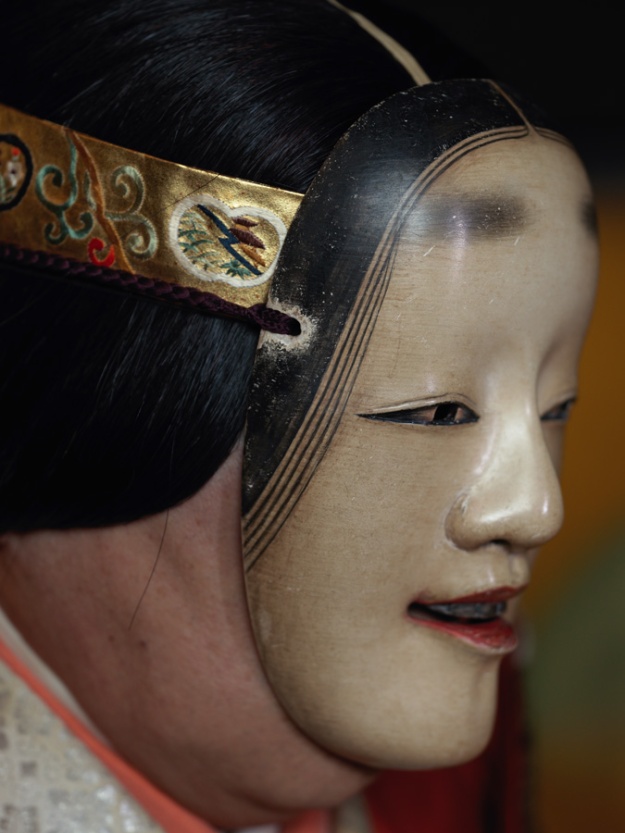 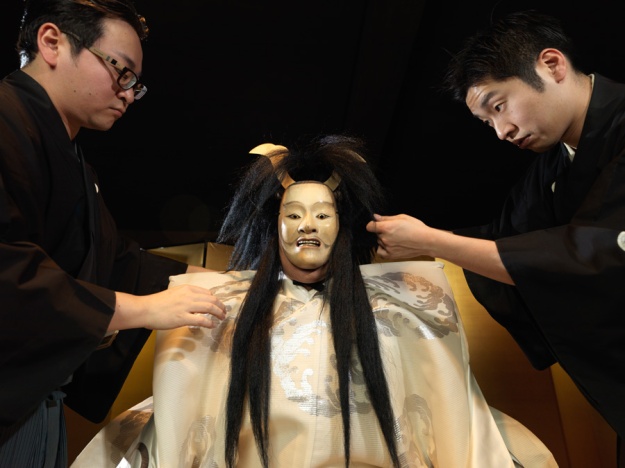 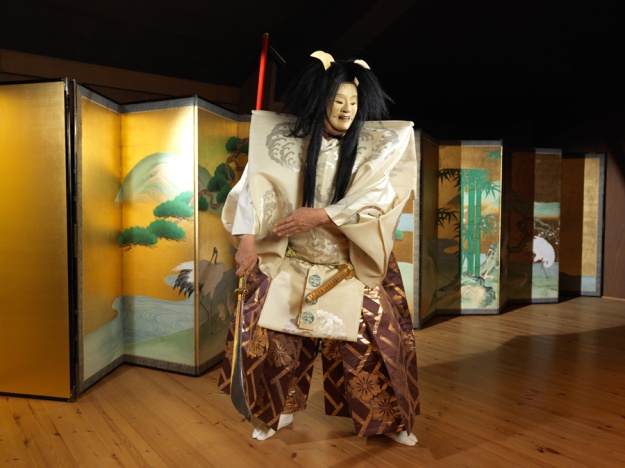 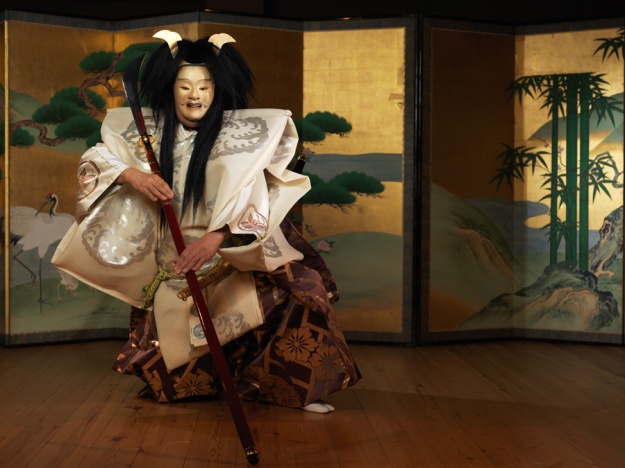 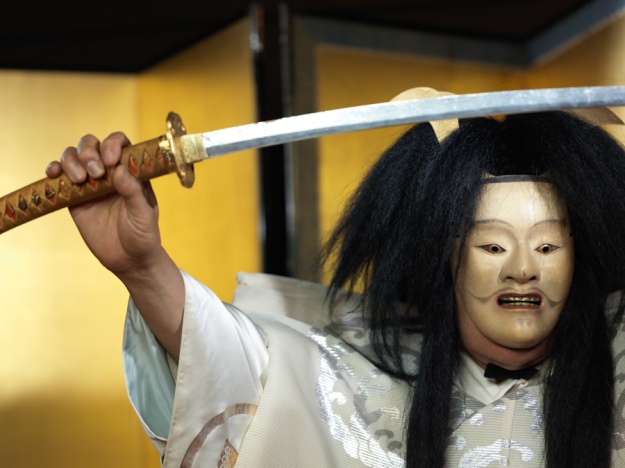 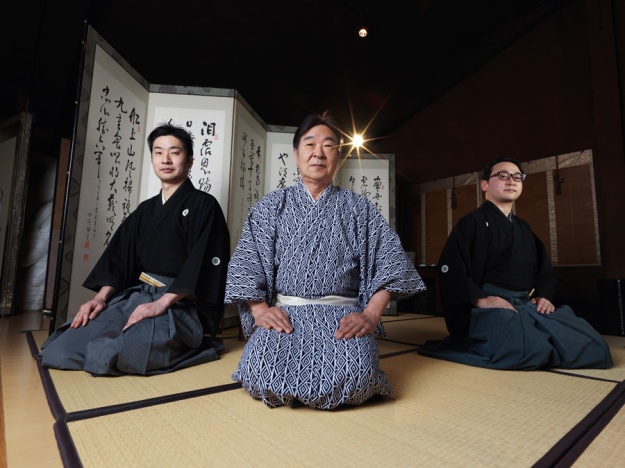